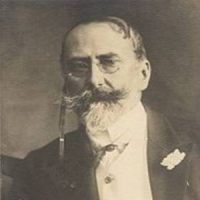 William Merritt Chase was born in Williamsburg (later Ninevah), Indiana, in 1849, the oldest of six children. When he was twelve, the family moved to Indianapolis. His father hoped that he would follow him into the women’s shoe business, but Chase, who said “the desire to draw was born in me,” resisted his father’s commercial ambitions for his own artistic ones. In 1867 he began his training with Barton S. Hays, followed two years later with study at the National Academy of Design in New York under Lemuel P. Wilmarth.

In 1871 Chase moved to Saint Louis, where he painted still lifes professionally. He attracted the attention of local patrons, who, in the fall of 1872, offered to send him abroad. At the Royal Academy of Fine Arts in Munich, where he received his most decisive training, Chase was one of the many Americans, including Frank Duveneck and later John Twachtman, studying there. After an extended visit to Venice with Duveneck and Twachtman in 1878, Chase returned to New York, where he began teaching at the Art Students League. He devoted much of his time and energy to teaching, not only at the League, but also the Brooklyn Art Association, the Pennsylvania Academy of the Fine Arts, the Shinnecock Summer School of Art, and the New York School of Art the last two of which he founded and was the most celebrated teacher of his time. As a leader of the insurgent younger painters who challenged the authority of the National Academy of Design, he was a founding member of the Society of American Artists and, in 1880, was elected its president. His large, sumptuously decorated studio in the Tenth Street Studio Building, which he took soon after his return to New York, was the most famous artist’s studio in America and a virtual manifesto of his and his generation’s artistic practices and beliefs, and of the dignity of the artist’s calling.

In 1886 he married Alice Gerson, who was frequently his model, as were their many children. Chase painted a wide range of subjects, including figures, landscapes and cityscapes, studio interiors, still lifes, and, increasingly later in life, portraits, and he worked with equal brilliance in oil and pastel. Chase died in New York City in 1916.