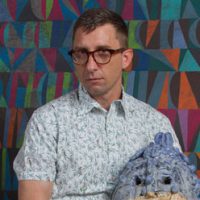 William J. O’Brien is a ceramist, sculptor, painter, and print-maker, fascinated with a variety of media, and with drawing, textural interplay, and pattern. He says of his work, “I look at my art practice as one of experimentation and improvisation. Working in different materials allows for different formal qualities of the work to come about. I am fascinated with using materials in their traditional, historical forms, but also with refuting their logic in experimental forms.”

O’Brien received a Bachelor of Arts degree in studio art from Loyola University Maryland in Baltimore (1997), and a Master of Fine Arts degree from the School of the Art Institute of Chicago, Illinois (2005), where he teaches. O’Brien moved from New York City to Chicago in the early 2000s. Known for his spirited ceramic sculpture and abstract drawings and collages, O’Brien has been called a “rising talent,” whose geometric abstractions in colored pencil offer a “rainbow of hues” in “fastidious patterns” and who makes “exuberant creations of idiosyncratic beauty.” (James Yood, “William O’Brien’s Sculptures and Drawings,” Architectural Digest, December 31, 2013). O’Brien has had solo exhibitions in Paris, Detroit, Chicago, and New York, among other places.