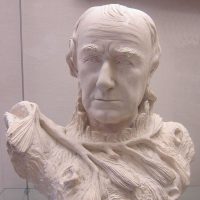 William Rush was a U.S. neoclassical sculptor from Philadelphia, Pennsylvania. He is considered the first major American sculptor. Rush was born in Philadelphia, the fourth child of Joseph Rush, a ship’s carpenter, and first wife, Rebecca Lincoln. As a teenager, he apprenticed three years with woodcarver Edward Cutbush, and soon surpassed his master in the art of carving of ships’ figureheads in wood. He saw military service during the American Revolution, as an officer in the militia. He opened his own wood carving business, and was in great demand when the U.S. Navy began building ships on Philadelphia. Later in life, he took up sculpture. Rush was one of the founders of the Pennsylvania Academy of the Fine Arts and taught sculpture there. He was also active in local politics, serving on the Philadelphia City Council for two decades. Rush died in Philadelphia and is buried at The Woodlands (Philadelphia).