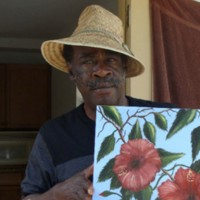 Most Highwaymen enthusiasts would agree that Willie Daniel’s work is extraordinary. He clearly has expertise with a paintbrush and a palette knife. He began by painting several works at one time, trying to create as many as he could like Alfred Hair and Livingston Roberts. He used Upson board like the other painters and later began working on Masonite, wood, and canvas. His oaks are gnarly, his oceans inviting, and his colors vivid. The compositions are traditional Highwaymen scenes, but he has a style that is his own. When he is at his best, his approach is impressionistic and skilled. His works seem to be created with ease, as if painting literally flows from his hand. His night scenes are dreamy and mysterious, evoking an interior landscape of the mind. Occasionally, he places small figures in his compositions, but the power of his work is in his feeling for the land.