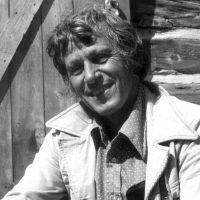 Born in Waldheim, Molotschna Colony, Ukraine to Heinrich Isaak Neufeld and Eliese Reimer Neufeld, Woldemar Heinrich Neufeld was the youngest child in the Neufeld family of two sons and two daughters. In 1939 he married Peggy Conrad in the chapel of the Lutheran Seminary in Waterloo, Ontario. They had three sons and one daughter.

During his earliest years Neufeld enjoyed the pleasures of life in a prosperous Mennonite family. His grandfather, industrialist Isaak Johann Neufeld, founded the family-run implement factory in Waldheim, where his father and uncles and 300 other employees worked. Neufeld’s father nurtured his young son’s artistic talent, encouraging him to draw bridges, trains, and other images related to his own training as an engineer. Throughout World War I, when his father served in the medical corps at the front, and throughout the Revolution and Civil War, Neufeld experienced enormous trauma, including the 1920 execution of his father on trumped-up charges. In 1923 Neufeld’s mother married the recently-widowed Jacob H. Janzen, himself the father of six. This well-known teacher and preacher was also a poet and playwright; he encouraged Neufeld to indulge his talent as an artist. In the summers of 1923 and 1924, Janzen arranged for Neufeld to take private art lessons with his nephew, the Moscow-trained painter Hans Janzen.

In the fall of 1924 Janzen, under surveillance by Communist officials, decided to immigrate with his family to Canada. The combined Janzen-Neufeld family, with ten children, journeyed through Riga, London, Southampton, Saint John, and Montreal to Waterloo, Ontario. The 15-year old Neufeld worked for a time on the farm of a Swiss Mennonite, Eldon Hunsberger, west of Waterloo, and attended a country school. After only a few days, he wrote to his mother in Waterloo: “Mama, wenn eß eben geht, dann schicke meinen Farbenkasten?” (“Mother, if it is at all possible, could you send me my paintbox?”)

After he joined the rest of his family in Waterloo in 1925, Neufeld spent a decade going to school and studying fine art in Kitchener-Waterloo and Toronto. His step-father took him to meet the Canadian painter Homer Watson in Doon, Ontario in 1926 or 1927. In 1931 Neufeld helped to found the Art Society of Kitchener and regularly exhibited in the society’s annual shows. In 1934 and 1935 he had one-man shows in Kitchener-Waterloo. In 1935 he moved to the United States: first to Cleveland, where he studied for four years at the Cleveland Art Institute, then to New York in 1945, where he established himself as artist and art-teacher on the upper east side. Finally, in 1949 he moved to New Milford, Connecticut, where he established a successful studio that he maintained into his old age. Neufeld’s sister, Kate Neufeld, who, in the 1930s, introduced him to block-prints though she herself enjoyed a reputation for her work in enamels, lived most of her adult life with Neufeld and his family in Connecticut.

Neufeld worked extensively in oils, water colours, and block-prints, and produced some sculpture. He often drew his images from streetscapes, landscapes, and shorescapes, generally employing documentary realism, though he also engaged in stylistic innovation. His work is held in prominent public and private collections in the United States and Canada. The largest collection is housed at Wilfrid Laurier University; another impressive collection is housed at Conrad Grebel University College, both in Waterloo, Ontario. 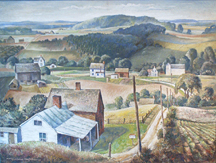