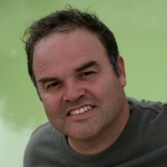 Xavier Cortada created art at the Earth Poles to generate environmental at point in between: In 2007, the artist used the moving ice sheet beneath the South Pole as an instrument to mark time; the art piece will be completed in 150,000 years. In 2008, Cortada planted a green flag at North Pole to encourage reforestation in the world below.

The Miami artist has worked with groups globally to produce numerous collaborative art projects, including peace murals in Cyprus and Northern Ireland, child welfare murals in Bolivia and Panama, AIDS murals in Switzerland and South Africa, and eco-art projects in Hawaii, Holland and Latvia.

Corporations such as General Mills, Nike, Heineken and Hershey’s have commissioned his art. Publishers like McDougal and Random House have featured it in school textbooks and publications. His work has also been featured in National Geographic TV and the Discovery Channel.

Cortada, who was born in Albany, New York and grew up in Miami, holds degrees from the University of Miami College of Arts and Sciences, Graduate School of Business and School of Law.