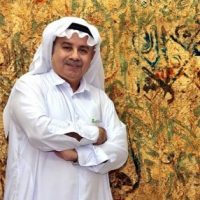 Born in Qatar in 1955, Yousef Ahmad developed his initial interest in art in his school years, traveling to Egypt after graduation to study art education at Cairo (now Helwan) University. Upon his return in 1976, his first government appointment was as Head of Art and Exhibitions within the Ministry of Information. This key post involved the organisation of exhibitions as well as providing support to and promoting Qatar’s artists. As an artist himself, Yousef had by then found his creative niche, practicing and developing the art of calligraphy.

Early in his career, Yousef began to explore the shape and form of calligraphy by focusing on his own visual interpretation of Arabic script in his paintings. In 1979, he travelled to the USA to complete a master’s degree, specialising in painting. It was at this time that he was introduced to printmaking techniques including silkscreen and etching. Around the same time, there was a significant shift in his approach: a new inclination for larger-scale works and a uniquely personal use of colour, material, and technique.

Returning to Qatar, Yousef taught art appreciation at Qatar University, a post he held for more than 20 years. With Mohammed Ali Abdulla and Hassan al-Mulla, he formed the art group The Three Friends. During his teaching career, Yousef met Sheikh Hassan bin Mohamed bin Ali Al Thani and the two formed a strong bond through their shared love of art. He was instrumental in working with Sheikh Hassan to collect significant works of Arab art from Qatar and abroad, which led to the foundation collections for the Orientalist Museum and Mathaf: Arab Museum of Modern Art, both of which were privately owned institutions at the time.

Inspired by the forms and the hues of the flat desert landscape of his native Qatar and by Arabic calligraphy, Yousef’s paintings are often collages of mixed-media works, colours and textures. Lines are elongated across the canvas or wood, and letters and patterns are layered with architectural shapes. He searched within these materials for what can best express his feelings represented in the sea, sky and land of Qatar.

Upon visiting Japan, Yousef became fascinated with Japanese handmade paper and began incorporating this into his work. His most recent paintings have been produced on paper hand-made from Qatari palm fronds that he creates himself, adding a unique, loved, three-dimensional brilliance to his work.

Yousef Ahmad’s keen interest in recording and archiving the development of Qatari art, as well as the fact that he has regularly represented his country at international biennials and events globally, has given him a special standing as an artist, art advisor, and writer.