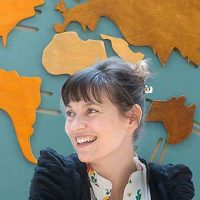 Quote
“For Barrada, Tangier is not simply a storied site within the modernist imaginary but the place of a complex experience that vacillates between two irreconcilable situations: emigration and mass tourism.”
Nuria Enguita Mayo, Parkett 91

Yto Barrada was born in Paris in 1971 and grew up in Tangier, Morocco. She studied history and political science at the Sorbonne and photography in New York. Her work — ranging across photographs, films, publications, installations and sculptures — engages with the peculiar situation of her hometown Tangier. Exhibitions of her work have been shown at the Tate Modern, the Renaissance Society (Chicago), Witte de With (Rotterdam), Haus der Kunst (Munich), SFMoMA (San Francisco), MoMA (New York), the Centre Pompidou (Paris), the 2007 and 2011 Venice Biennale, and Whitechapel Gallery (London). She was the Deutsche Bank Artist of the Year for 2011 after which her exhibit RIFFS toured widely. Barrada is also the founding director of Cinémathèque de Tanger. Her first monograph was published by JRP Ringier in the Fall 2013. She is a recipient of the 2013-2014 Robert Gardner Fellowship in Photography (Peabody Museum at Harvard University).

Lives and works in Tangier, Morocco and New York City