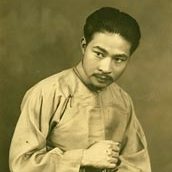 Canton-born modernist painter Yun Gee (1906-1963) immigrated to San Francisco in 1921 at the age of fifteen to join his merchant father, Gee Quong On. In 1906, Gee’s father was among the thousands of Chinese immigrants to claim US citizenship following the San Francisco earthquake that destroyed City Hall and the Hall of Records housing citizenship papers, thus enabling him to later sponsor his son to America.

Settling near Chinatown, Gee decided to pursue a career in art. He received his classical training at the California School of Fine Arts (now the San Francisco Art Institute) studying under artists Gottardo Piazzoni and Otis Oldfield. Befriending San Francisco’s avant-garde, Gee was among a group of artists who established the Modern Gallery on Montgomery Street in 1926, which later became the San Francisco Art Center. In 1926, Gee also founded the Chinese Revolutionary Artist’ Club, where he taught classes in advanced painting techniques and theory.

In 1927, under the patronage of Prince and Princess Achille Murat, Gee moved to Paris where he became introduced to bohemian circles interested in poetry and Cubist painting. There, he exhibited alongside avant-garde Parisian painters in the Société des Artistes Indépendants’ annual Salon des Indépendants and other famous galleries. This period also saw a shift in his work from an adherence to “Diamondism,” a theoretic system Gee developed that explores his interest in the process of perception, and the possibility/impossibility of absolute truth, to what the artist termed a more lyrical expression that incorporated his personal feelings and cultural roots in his works. In 1930, he married poetess Princess Paule de Reuss. De Reuss’s family disapproved of the marriage and responded by disowning her. The couple subsequently divorced two years later.

When he returned to America in the early 1930s, Gee settled in New York City, where he found a decidedly different and indifferent reception. Although he was included in exhibitions at the Brooklyn Museum and the Museum of Modern Art, Gee’s predominant experience was one of alienation and discrimination. Contrasting his warm welcome in Parisian circles to experience in New York Gee observed, “I was no longer an artist. I was an oriental from Chinatown… and I suppose the interpretation of such a person was that he was only a launderer or a restauranteur… and this was hardly the reception I expected in my own country. … the name for the Chinese in this city was “Charlie,” an unfair interpretation of the many distinguished Chinese families who aided in making America grow…” (excerpted from “Yun Gee Speaks His Mind” in Yun Gee: Poetry, Writings, Art, Memories). Gee struggled through the Depression, participating in numerous WPA-sponsored programs, including the Easel Painter’s Project and the play “Kuan Chung’s Generosity”, for which he wrote the script and designed the puppets and set. In New York, Gee also continued his involvement in the Chinese community by using his work to fundraise for causes in China, including painting a mural as contribution to the Chinese Flood Relief Campaign.

In 1936, Gee again moved to Paris, but returned to New York at the outbreak of World War II in 1939. In 1942, he married Helen Wimmer, of Limelight Café fame in Greenwich Village, with whom he had a daughter, Li-lan. The couple separated in 1945 and divorced in 1947. Toward the end of his life, Gee struggled with alcoholism and died of stomach cancer in 1963.

Though known primarily for his paintings, Gee explored various avenues of art, including music and performance, and even after having achieved acclaimed for his distinctive painting style, Gee remained open to different artistic movements such as hyperrealism and symbolism then in fashion in Europe and was not afraid to experiment and incorporate these contemporary influences in his own work. Despite facing his share of discrimination as an artist of Chinese descent, he also broke barriers by often being the first Chinese artist to exhibit in galleries in San Francisco, Paris, and New York.