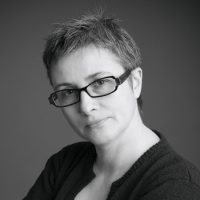 Born in Prague, Czechoslovakia, Yvette Kaiser Smith now lives and works in Chicago. While earning her 1990 BFA from Southern Methodist University in Dallas, Texas, she attended Yale Summer School of Art, Norfolk, Connecticut. Since earning her MFA in 1994 from the University of Chicago, Yvette has exhibited extensively in solo and group shows at regional museums, art centers, and university galleries throughout the United States and abroad, including U.S. Embassies in Moscow and Ankara and galleries in Berlin and Rome. A 2009 recipient of the Illinois Art Council’s Fellowship Grant, her work is included in the collections of US Embassy, Abuja, Nigeria; Philadelphia Ritz Carlton Residences; the Elmhurst Art Museum, IL; Englewood Senior Center, Chicago; Deloitte Chicago; Old Orchard Towers, Skokie, IL; City of Port Royal, South Carolina; and the UIC Hospital, Nutrition and Wellness Clinic, Chicago.

Yvette Kaiser Smith creates her own fiberglass cloth by crocheting continuous strands of fiberglass into flat geometric shapes. These are formed and hardened with the application of polyester resin and the use of gravity. Small finished units are sewn together with the fiberglass into medium sized blocks which assemble to form a larger unit or grid structure. This work engages math as a structural foundation by utilizing the grid, prime numbers, the numbers Pi and e, and Pascal’s triangle. To create a new work, she creates a system. She chooses a number sequence from the numbers pi or e, or a section from Pascal’s Triangle; defines a specific method for articulating the digits; defines colors and a sequence for the colors; and follows the plan to create the work.

These are straight forward interpretations of each digit, a visual articulation of mathematics as a way to generate a random visual pattern through form and color distribution. Yvette likes to use a number sequence large enough that the pattern revealed can be read as some sort of code or blueprint, an internal architecture that reads like it gives clue . . . to something. The qualities of the crocheted fiberglass material are organic yet the math that builds each work gives it structure and logic. These hybrids of science and art allude to: internal architecture or code of some sort of organic entity, a microscopic code enlarged; internal patterns that code the individual, DNA; external codes, population, individuals, masses, community, and tradition.

Math is inseparable from nature, from us. Numbers represent the human search for knowledge, as the search for numbers went on for thousands of years. And, all cultures seem to have their own lace tradition. If identity is a hybrid of our heritage, then lace is, as tradition of time, labor, and creativity, one tiny point of intersection that connects us all. The work is also as much about process as it is about identity: process of making, process of questioning, process of abstracting. 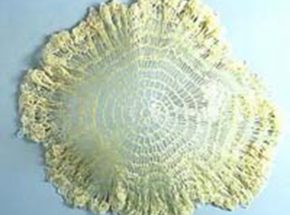