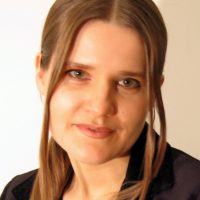 Artist, designer and researcher Dr. Zane Berzina, originally from Latvia, is involved in interdisciplinary projects across the fields of science, technology, design and the arts. Her practice and research evolves around responsive, active and interactive textiles, new materials, processes and technologies as well as biomimetic practices. In 2005 Zane accomplished a practice-based Ph.D. ‘Skin Stories : Charting and Mapping the Skin’ at the London College of Fashion, University of the Arts London using analogies of human skin in relation to her textile practice. Currently she is Professor at the Kunsthochschule Berlin-Weißensee and an Associate of the Goldsmiths Digital Studios, Goldsmiths College, University of London.

Since 1991 Zane Berzina has been exhibiting extensively in Europe and beyond including places such as FACT – Foundation for Art and Creative Technology, Liverpool; Casino Luxembourg – Forum d’art contemporain, Luxembourg; the State Art Museum in Moscow; the Science Museum in London; the Textile Museum of Prato in Italy; the National Art Museum of Estonia in Tallinn; the Victoria & Albert Museum in London. She has also had eleven solo exhibitions in Berlin, Riga, London and Helsinki; the most recent of them being ‘E-Static Shadows’ together with architect Jackson Tan at the Science Museum’s Dana Centre in London, UK in 2009 and ‘Skin Stories II – Archaeology of Skin’ at the Foreign Art Museum in Riga, Latvia in 2006 by invitation of the British Council.

Zane Berzina is actively involved in the cultural debate across design, art, crafts, technology and creativity. Her theoretical and practical research outcomes and findings have been incorporated into academic articles and conference papers, which have been presented at international conferences in the UK, USA, Germany, Canada and France. She has worked as a lecturer at The University of Arts Berlin, College of Design and Architecture, Institute for Experimental Fashion and Textile Design, Germany (2000-2004) and at the Goldsmiths College, Visual Arts Department, University of London (2004-2006). She also gives guest lectures, master classes and consultations at various higher education institutions and design companies internationally.

Zane Berzina is also a co-founder and director of the E-Text+Textiles Project in Riga, Latvia which focuses on investigations of interrelationships between the text and textile practices within technological and electronic environments. Since 2008 Zane Berzina is Professor for Textile and Surface Design at the Kunsthochschule Berlin-Weißensee, Germany.