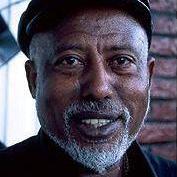 Zerihun Yetmgeta has a cosmopolitan outlook. Modern concepts and ideas reside in him firmly and, as such, do not seem to be disturbed by technological progress. He is rather obsessed by traditional beliefs, superstitions, and taboos that are still practiced in traditional Ethiopian society, and he seems determined to ridicule and exorcise their mystery using his pictorial imageries. His paintings, woodcuts, and drawings are in tune with 20th century universal art trends and as such should be judged from this perspective. Since his first group show in Europe in 1966 and his first one-person exhibition in Addis Ababa in 1970, he has participated in over 25 group and solo shows, and has produced thousands of pictures. In all of his exhibitions he has been communicating ideas, and feelings effectively, intensely, and vividly by altogether abandoning the science of anatomy, mathematical, single-point perspective, and traditional western representation. Zerihun applies his artistic methods, approaching, if I may say, the style and characteristics of Ethiopian art and the rules of Ethiopian aesthetics.