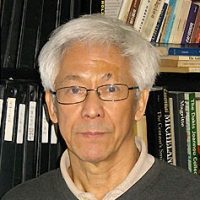 Zhang Hongtu is a Chinese painter. Born in 1943 in Pingliang, Zhang lives and works in New York. After moving from China to the United States in 1982, Zhang Hongtu produced mostly Pop-inflected work, sometimes critical of the Cultural Revolution. His academic training, however, involved a deep immersion in both classical Chinese and Western modernist landscape styles.

Zhang was born into a traditional Muslim family in 1943 in Pingliang, Gansu Province. His family’s ancestral home was Luoning, Henan Province. Zhang left Pingliang with his parents for Shanghai, via Xi’an, and traveled to Nanjing, Suzhou, and Zhengzhou before finally ending up in Beijing in 1950.

After settling in Beijing, Zhang’s family moved frequently within the city and changed addresses no less than ten times. His six years of elementary education were completed in five different schools. Zhang entered the high school attached to the Central Academy of Fine Arts in 1960. During his four years there, he learned some basic painting techniques including western water color and drawing, Chinese calligraphy and Shan-shui. But the basic teaching philosophy of the school was “Socialist Realism” imported from the Soviet Union.

After study at the Arts and Crafts Academy (he chose ceramics because Picasso studied ceramics), and considerable disruption by Cultural Revolution relocations, Zhang applied to the graduate school at the Central Academy of Fine Arts in 1982 — he was not admitted. In July, he flew from Beijing to New York via San Francisco. For four years beginning in the fall of that year, Zhang took classes in the Art Students League in New York while working different jobs. One of his favorite teachers there was Richard Pousette-Dart (1916-1992). In Zhang’s words: “Although he would never tell you in class that you “should do this” or “should do that”, he would neither tell you “Don’t do this” or “Don’t do that!” In the fall of 1982, Zhang read the saying “National art is bad, good art is national” in a Guggenheim Museum exhibition catalogue and has been influenced by the notion ever since. In 1987, Zhang took part in the founding of the Chinese United Overseas Artists Association, which gathered together, around Yuan Yunsheng, most of the Stars’s founding members (Huang Rui, Ma Desheng, Wang Keping, Ai Weiwei and Li Shuang) plus some Chinese artists living in the United States.