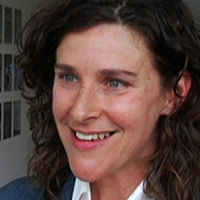 Zoe Leonard is an American artist and photographer, based in New York City. A photographer since the mid-1980s, she has been well known since her work appeared in documenta IX in 1992. She was shortlisted for the 2010 Deutsche Börse Photography Prize.

Leonard was born in Liberty, New York, the daughter of a Polish refugee, and grew up in New York City. At 15, she dropped out of school and started taking photographs. She has spent much of her adult life living in New York City, which has been the focus of much of her work. She became well known following her 1992 exhibition in documenta IX. During the mid-1990s she spent two years living alone in Alaska, an experience that influenced her artwork.

In 1995 she had an exhibition called Strange Fruit (for David), inspired by the 1992 death of her friend, artist David Wojnarowicz from AIDS, as well as a trip to India. The exhibition, at her studio in the Lower East Side of Manhattan, involved discarded fruit skins she had sewn together and decorated with materials including wire, buttons and thread.It was exhibited during 1998 at the Philadelphia Museum of Art. She said of this work, “This act of fixing something broken, repairing the skin of something after the fruit of it is gone, strikes me as both pathetic and beautiful. At any rate it is intensely human.”

Leonard created the Fae Richards Archive, a collection of photographs of a fictional 1930s actress for Cheryl Dunye’s 1996 film The Watermelon Woman. Her 2000 exhibition at the Paula Cooper Gallery featured a collection of dolls she had found or bought at flea markets.

In 2009 she had an exhibition called Zoe Leonard Photographs, at Munich’s Pinakothek der Moderne, as well as Derrotero, shown at the Hispanic Society of America in New York City. In 2010 she was shortlisted along with three others for the £30,000 Deutsche Börse Photography Prize, which was won by Sophie Ristelhueber.