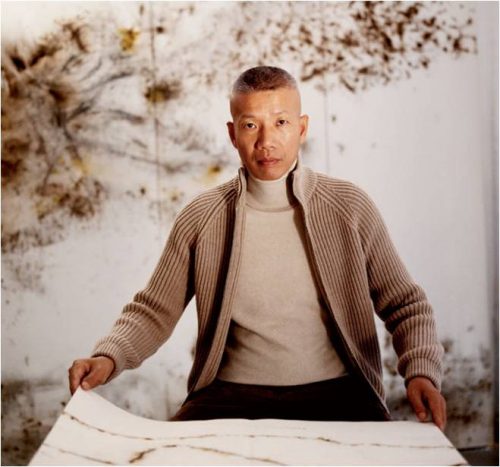 Cai Guo-Qiang was awarded the Medal of Art for his longtime contributions to Art in Embassies and cultural diplomacy on November 30, 2012.

Trained in stage design, Cai Guo-Qiang brings together drawing, installation, video, and performance in his work. While living in Japan from 1986 to 1995, he explored the properties of gunpowder in his drawings, an inquiry that eventually led to his experimentation with explosives on a massive scale and to the development of his signature explosion events. Over the years, Guo-Qiang has developed a new aesthetic model that aims to establish a bond between viewers and the larger universe around them. Drawing upon Eastern philosophy and contemporary social issues and using a site-specific approach to culture and history, his art may be experienced simultaneously not only by one or a few persons but also, at times, by audiences of thousands or even millions. His approach also embraces collaboration with people of different ethnicities, and uses art to transcend national borders and encourages cross-cultural dialogue. Commissioned for the permanent collection at the US Embassy, Beijing, Cai’s Eagle Landing on Pine Branch eloquently combines motifs from both China and America and alludes to traditional Chinese Literati paintings. His career has centered on collaborating with people of different ethnicities, and using art to transcend national borders and encourage cross-cultural dialogue. At present, he and AIE are exploring a project for the new Chancery in Afghanistan which will involve working with children from the local community. Cai Guo-Qiang was born in 1957 in Quanzhou, Fujian Province, China. He has received a number of awards, including the forty-eighth Venice Biennale International Golden Lion Prize and the CalArts/Alpert Award in the Arts. Among his many solo exhibitions and projects are “Light Cycle: Explosion Project for Central Park,” New York; “Ye Gong Hao Long: Explosion Project for Tate Modern,” London; “Transient Rainbow,” the Museum of Modern Art, New York; “Cai Guo-Qiang,” Shanghai Art Museum; and “APEC Cityscape Fireworks Show,” Asia Pacific Economic Cooperation, Shanghai.