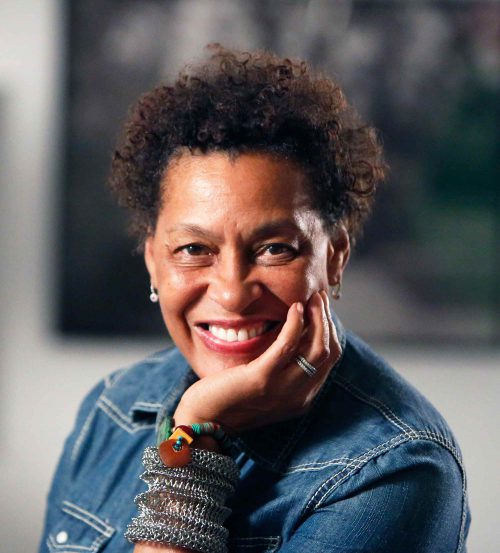 Carrie Mae Weems was awarded the Medal of Art for her longtime contributions to Art in Embassies and cultural diplomacy on November 30, 2012.

“On the surface it may appear that I am moving away from question of race and gender. However, as a socially engaged artist, I continue to explore these subjects, while turning a poetic eye to the subtle and ephemeral qualities of love: its power to embrace and to destroy.” Eliciting epic contexts from individually framed moments, Carrie Mae Weems’s work leads you through a visual narrative on the African-American experience as it relates to equality, racial identity, gender, and class. Weems’s vibrant explorations of photography, video, and verse moves marginalized voices to the forefront of civic discourse. Weems is represented in the permanent collections of three U.S. Embassies: the archival digital prints, African Girl, from the Gems and Jewels Series in Antananarivo, Madagascar; an untitled photograph from the Eatonville Series in Monrovia, Liberia; and two works from the Africa Series in Bamako, Mali. She also has work at the United Nations Headquarters in New York and on loan to the U.S. mission to the United Nations in New York. Considered one of the foremost artists of her generation, was born in Portland, Oregon, and earned a Bachelor of Fine Arts degree from the California Institute of the Arts, Valencia (1981), and a Master of Fine Arts degree from the University of California, San Diego (1984), continuing her studies in the Graduate Program in Folklore at the University of California, Berkeley (1984-87). Among her many accolades are the Anonymous Was a Woman Award (2007), the Skowhegan Medal for Photography (2007), and the Rome Prize Fellowship (2006). Weems’s work has appeared in major exhibitions at Savannah College of Art and Design, Georgia (2008); W. E. B. Du Bois Institute for African and African American Research, Harvard University, Boston (2007); Williams College Museum of Art, Williamstown, Massachusetts (2000); and the Whitney Museum of American Art, New York City (1998), among others.