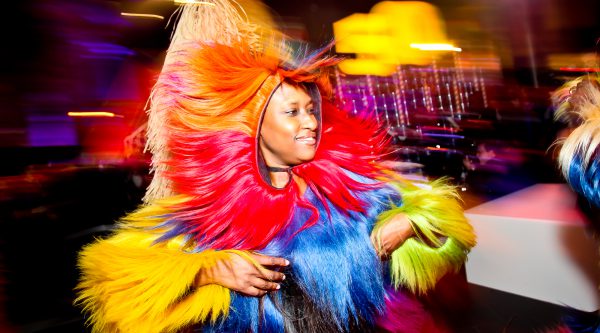 Sculpture reinvents itself as sound, as music and as a source of protection in the hands of Nick Cave.

Sculpture reinvents itself as sound, as music and as a source of protection in the hands of Nick Cave.

The Chicago-based performance artist and sculptor constructs “Soundsuits,” material-heavy costumes that inspired a number of Corcoran College of Art + Design students to respond to his work through music and spoken word, performed at an artist-exchange workshop Wednesday evening at THEARC (1901 Mississippi Ave. SE.). Performing artist Nick Cave. (James Prinz Photography) The event was part of a week of events to celebrate the 50th anniversary of the U.S. State Department’s Art in Embassies (AIE) program, as featured by Mark Jenkins.Cave participated in an AIE cultural-exchange program earlier this year by making a bas-relief monument for the new embassy in Dakar, Senegal.

His main work, however, remains in his Soundsuits. In the past 20 years, Cave collected various found materials — such as twigs, beads, buttons and human and synthetic hair — to clothe his Soundsuits, which are akin to traditional African ceremonial masks. When Cave dons the suits, the sculptural pieces evolve into extensive audio performances , generating a distinctive symphony of sound when the materials reverberate and rustle against one another through his physical movements.

In 1992, Cave created his first suit — from twigs — in reaction to the LAPD’s arrest and beating of black motorist Rodney King, a case that would inflame the city and spark the riots.

Style Blog chatted with the artist as he ruminated on his creative process and student responses to his work:

Article by Winyan Soo Hoo – use the following link to see the full interview with Nick Cave about his soundsuits. https://www.washingtonpost.com/blogs/arts-post/post/soundsuits-sculptor-nick-cave-performs-at-the-us-state-departments-art-in-embassies-50th-anniversary-celebration/2012/11/28/ab97c740-39a1-11e2-a263-f0ebffed2f15_blog.html