Nasreen Haroon traveled on behalf of Art in Embassies to Algiers, Algeria from November 5 through November 13, 2008.

Nasreen Haroon traveled on behalf of Art in Embassies to Algiers, Algeria from November 5 through November 13, 2008. During the visit Nasreen participated in children’s art workshops, she coordinated the painting of a mural at a local NGO for battered women and children. Ms. Haroon also held master classes at the Academy of Fine Arts, several presentations to the Museum of Fine Arts and the U.S. Embassy; and a roundtable discussion at a local art gallery. Her trip was publicized by several radio interviews and two TV interviews with Haroon where she discussed her art and the Art in Embassies program.

The events reached out to children, students, academics, cultural leaders, media, and the community at large. She truly served as a cultural Ambassador and at times she was able to interject her background, her life as a Muslim American and her work on the interfaith council in Los Angeles.

Nasreen also participated in televised events while in Algeria. On the “Bonjour Algerie” show, which is similar to “Good Morning America” she was on the show for over half an hour, which is a noteworthy occasion for the Embassy. It was an opportunity to showcase the program, to reach out to the Algerian public, and to show the diversity of the U.S. society.

(whole video is quick cuts around the embassy, largely of children playing, no English) 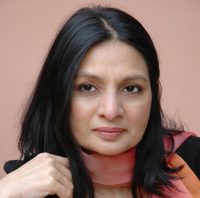