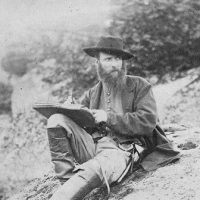 In 1860 Alfred Waud became an illustrator or “special artist” (a full time paid staff artist) for the New York Illustrated News. In April 1861, the newspaper assigned Waud to cover the Army of the Potomac, Virginia’s main Union army. He first illustrated General Winfield Scott in Washington, D.C., and then entered the field to render the First Battle of Bull Run in July. Waud followed a Union expedition to Cape Hatteras, North Carolina the next month. That autumn, he sketched army activity in the Tidewater region of Virginia. Waud joined Harper’s Weekly toward the end of 1861, continuing to cover the war. In 1864 Alfred’s brother, William Waud (who up to that time had been working with “Frank Leslie’s Illustrated Newspaper”), joined Alfred on the staff of Harper’s and they worked together during the Petersburg Campaign.

Alfred Waud attended every battle of the Army of the Potomac between the First Battle of Bull Run in 1861 and the Siege of Petersburg in 1865. Alfred was one of only two artists present at the Battle of Gettysburg. His depiction of Pickett’s Charge is thought to be the only visual account by an eyewitness.

Waud died in 1891 in Marietta, Georgia, while touring battlefields of the South.