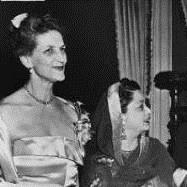 Alice Acheson, the widow of Dean Acheson, Secretary of State to President Harry S. Truman from 1949 to 1953, was a handsome, elegant lady of immense charm. She was also a talented painter in oil and water-colour who exhibited in many American galleries and museums. Her subjects included Washington scenes as well as portraits and landscapes of foreign countries which she and her husband had visited over the years.

She was of flinty material, not afraid of telling Winston Churchill that his palette was “too bright” or Henry Kissinger that it was the Achesons’ dinner time and that he must finish his discussion with Dean. She was aged about 85 when she was threatened near her home in Georgetown by a youth with a gun. He demanded that she should hand over her purse, containing a substantial amount of money she had just withdrawn from the bank to buy Christmas presents. She immediately boxed his ears, telling him that he should be ashamed of menacing an old lady in broad daylight.

Alice Stanley was the daughter and granddaughter of artists. Her grandfather, John Mix Stanley, was renowned for depicting American Indian life in the Wild West. Her mother was a water-colourist who encouraged her daughter, growing up in Detroit, to start painting at a very early age. Alice went on to study art at Wellesley College, in Massachusetts, where one of her friends was Dean Acheson’s sister Margaret. This friendship, according to Alice’s son David Acheson, was the attraction of opposites. “Alice Stanley was a classic brunette beauty, artistic, reserved, raised in a Midwest family of strong independence and high regard for education. Margaret, or Margot, was a flamboyant, glamorous, beautiful redhead who regarded social conventions as testing obstacles put in the way of talented people to overcome.”

Margot Acheson invited Alice Stanley to visit the home of her British- born father, Bishop E.C. Acheson, in Middletown, Connecticut, where Stanley met her future husband. They were married shortly before her graduation, and moved to Washington, for Dean Acheson had become the private secretary to Justice Louise Dembitz Brandeis of the Supreme Court. Early in her married life she became a professional painter, at first mostly in water- colours, and then branching out into oils. By the late 1930s she had exhibited at the Corcoran Museum and the Phillips Collection in Washington, and at numerous other galleries around the United States, and had been included in at least one major travelling exhibition.

During the Second World War, she abandoned painting to head the American Women’s Voluntary Service Group, training women to work on Maryland farms. (The Achesons had bought a farm in Maryland in the 1920s, from where she regularly rode to hounds.) She also taught drawing and painting to wounded soldiers.

During the time that Dean Acheson was Secretary of State she continued to paint, but gave up exhibiting, not wishing to trade on his fame. She played an important supporting role to him, and much of her time was taken up with travelling and receiving political visitors to Washington.

Excerpted from the The Independant (www.independent.co.uk/news/people/obituaryalice-acheson-1325671.html), accessed 4-12-11