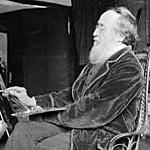 Benjamin Champney is synonymous with White Mountain paintings of the 19th century. Most art historians consider him the founder of the White Mountain School of painters who came to North Conway and the surrounding area during the second half of the 19th century. His paintings were often used to make chromolithographs that were subsequently sold to tourists who could not afford Champney’s originals.
Champney was born in New Ipswich, NH on November 17, 1817. He began his training as a lithographer under Pendleton in Boston. He visited the Conway area for the first time in 1838. Champney also studied with Robert Cooke, with whom he went to Paris in 1841, on the advice of Washington Allston. Champney returned to Boston in 1846 and then returned to Europe almost at once to paint a panorama of the Rhine River. He returned to Boston in 1848 and exhibited the panorama there and in New York City where the panorama was subsequently destroyed by fire in 1853.

In 1850 Champney returned to the White Mountains with his friend Kensett. Their enthusiasm and paintings drew large numbers of Boston and New York artists to the Conway area. His studio was a noted resort and was visited by many people from all parts of the country.

In 1853 Champney married and bought a house between Conway and North Conway, making this his summer home for over fifty years. In 1854 he again returned to Europe on a painting trip to Germany and Switzerland with his friend John F. Kensett.

On August 4, 1888 The White Mountain Echo reported: “Champney’s studio is as much visited as ever this summer, and there are many new pictures to see. Of the landscapes, there is a view from the new carriage road up Humphrey’s Ledge that is beautiful, and another a scene in Crawford Notch, and still another, a picture of Mount Chocorua from Tamworth; there are some lovely new flower pieces … But perhaps the very prettiest is the old-fashioned pitcher in the kitchen window …”
Champney exhibited regularly at the Boston Athenaeum. In 1855 Champney became a founder of the Boston Art Club and its president in 1856. In 1900 he published an autobiography, Sixty Years’ Memories of Art and Artists.
Champney was the uncle of the artist Edwin Graves Champney.