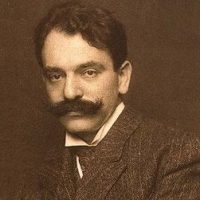 The founder of the Silvermine Guild, a successful teacher, illustrator, and master of ceramic and graphic art, Bernhard Gutmann received serious critical acclaim during his lifetime, and his work was shown in major exhibitions and museums. But since his death in 1936 his work has gone unnoticed, largely because he did not need to sell his art. His works remained in the family rather than going to the collectors, museums, and galleries that would have introduced him to a general audience.

Born in 1869 and educated in Germany, Gutmann arrived in the United Stated at the age of 23. From modest immigrant beginnings—he moved to Virginia to work as an electrician—he rose to be the first superintendent of drawing in the Lynchburg public schools. After his marriage to Bertha Goldman, granddaughter of the founder of the investment banking firm Goldman Sachs, he was free to concentrate on his art alone.

Described during his “rediscovery” in 1988 as “an American Gauguin,” Gutmann had a great influence on American regional art: he organized the still functioning Lynchburg Art Club in Virginia and later assisted in the foundation of the thriving Silvermine Guild of Artists in New Canaan, Connecticut.