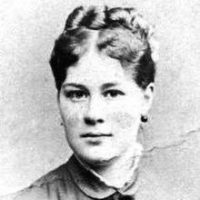 In the history of American art, Cecilia Beaux stands out as a portrait painter of great sensitivity and originality. She not only captured penetrating likenesses of the social and intellectual elit but also intimate and perceptive portrayals of women and children that remain outstanding examples of the genre.

Born in Philadelphia, Beaux was raised by her grandmother and two aunts after the death of her mother. Her early training was sporadic, beginning with classes taught by her cousin, the first woman instructo at the Pennsylvania Academy of Fine Arts. Realizing the necessity for European study, she sailed to Paris in 1888 and enrolled in the Academie Julian. A summer spent in Brittany clarified her style where she sought to combine new ideas and techniques learned in Paris with her own personal style of portraiture. She spen a number of years in Europe before returning to the U.S. in 1895 to teach at the Pennsylvania Academy of Fine Arts. She continued to journey frequently to France, which she considered the source of her artistic inspiration.

Over her lifetime, she won many national awards. Her first international recognition came in 1896 with her exhibition of six portraits at the Paris Salon and her election as an Associate of the Societe Noarionale des Beaux-Arts, a rare honor. By 1900 she had moved to New York and was well established as a portraitist who painted, among others, Mrs. Theodore Roosevelt and Mrs. Andrew Carnegie. In 1919, she received a major commission to paint three World War I heroes: Cardinal Mercier, Archbishop of Malines, Belgium; Admiral Lord Beatty of the British Navy; and Georges Clemenceau, Premier of France. It is this portrait of Georges Clemenceau that greets visitors in the formal entry hall in Rue Weber.