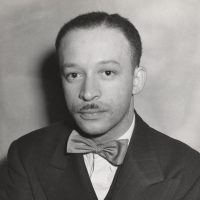 Charles Alston was born in Charlotte, North Carolina in 1907. Alston was an illustrator, educator, graphic artist, sculptor, and painter. He received B.A. and M.A. degrees at Columbia University and New York University respectively.

Alston taught at the Harlem Community Art Center, Harlem Art Workshop, and Pennsylvania State University. He was also an associate professor of painting at The City University of New York, as well as a muralist for the WPA during the Great Depression. Alston served as a member of the Board of Directors of the National Society of Mural Painters and was an active member of Spiral, a collaborative group for artists during the 1960’s. Alston was also selected by the Museum of Modern Art and the U.S. State Department to coordinate the children’s creative center for the Brussels World’s Fair. Alston died April 27, 1977, in New York City.

Other works by Alston can be seen at The Metropolitan Museum of Art; Butler Institute, Youngstown Ohio; Atlanta University; The Whitney Museum of American Art; Detroit Institute of Art; and Howard University, Washington D.C. 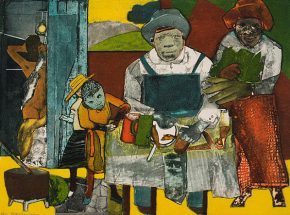