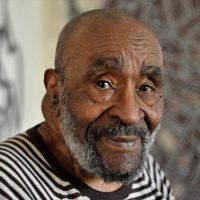 Charles McGee is an American visual artist who was born in Clemson, South Carolina and perhaps Detroit’s most important and influential visual artist. He arrived in Detroit during the Great Migration when he was 10 years old. McGee served as a United States Marine in World War II, and was assigned duty to clean up Nagasaki after the bomb. He attended Detroit’s fine arts school, the College for Creative Studies on the GI Bill. He later served as a professor of art, a co-founder of the Contemporary Art Institute of Detroit, and his assemblages, paintings, and sculptures can be found in the collections of the Detroit Institute of Arts, Charles H. Wright Museum, Howard University, the US Embassies in Benin and Peru, Michigan State University, Central Michigan University and University of Michigan. There have been many articles about Charles McGee, including ‘This 92-Year-Old Muralist Refuses to Slow Down’ written by Ryan Patrick Hooper for Creator’s Project in 2017.

Nature is an important theme in McGee’s art. Born into a family of sharecroppers, he spent his childhood outdoors, in the elements. While helping his grandfather tend to the land, he observed firsthand the order and harmony that exists within nature. He recognized that there is no hierarchy among living things. Snakes, rats, insects, cats, dogs, humans — each is necessary, endowed with a unique purpose. And each has found a place on McGee’s canvas.