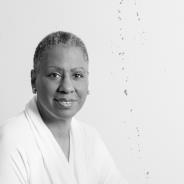 In 2002 Aziza decided to pursue her art making full time. In 2003 her focus became painting.
By 2005 she was combining printmaking and assemblage with painting, moving into mixed media works. Since then she has exhibited in Washington DC, Maryland, New York, Illinois, Iowa, Pennsylvania, Virginia, Texas, Florida, Great Brittan, Argentina and Poland. She was one of the ten artists chosen to create a digital print portfolio with David Adamson for the DC Commission on the Arts. Ms. Gibson-Hunter completed a banner for the Washington DC Art Walk as part of a public art piece erected on the grounds of the former Washington DC Convention Center. A co-founder of Black Artists of DC, she represented BADC during Art Basel Miami 06, in the Design District. In the same year Ms. Gibson-Hunter was awarded the Artist Fellowship Program Grant, from the DC Commission of the Arts and Humanities. In 2010 she took a residency with Pyramid Atlantic where she studied papermaking. Her work is included in the Washington DC Art Bank, the John A. Wilson Building Permanent Art collection and other notable collections.