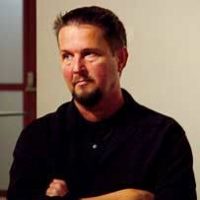 “David Bates deals with the fundamental relationship between man and nature. His creations, which he describes as open-ended narratives, explore the culture of the South and Southwest as part of a broader American perspective. For his paintings, Bates consistently chooses subjects of humble origin, such as bait-sellers, who embody our nostalgia for an earlier, less complicated America. Iconic in their visual presence, his images remind us that the old values of loyalty and dependability, pride in work, and respect for nature have an enduring appeal.”