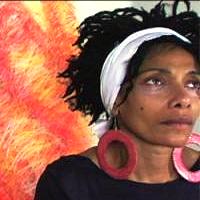 Denise Ward-Brown is an associate professor, filmmaker, and internationally exhibited sculptor whose art frequently explores African and African-American themes and history. Denise earned her BFA at Tyler School of Art, Temple University, and her MFA in Sculpture at Howard University.

While spending a year in Ghana, West Africa, as a Senior Fulbright Scholar, Denise developed her love of video. She has filmed her travels and research in Côte d’Ivoire, Mali, Togo, Benin, Nigeria, and South Africa. She has produced several documentaries.

Edina Bakatue (2003), filmed in Ghana, follows an annual celebration of the opening of the lagoon to fishermen in the town of Edina.

View From the Other Side (2005) is a video from the African perspective of the Trans-Atlantic Slave Trade.

In New York City, Denise produced the video essays Isis and Evil Gal. Both deal with topics of female identity and relationship issues.

In St. Louis, Denise directed, produced, filmed, and edited i am loved (2006), in which a heartbroken mother recounts how she never got the chance to celebrate with her 17-year-old son his pride in being gay because he was killed in a car accident.

Being Born Is Marvelous (2008) recounts 91 years of life: The memories, advice, family, friends, video, and photos are assembled in short vignettes, giving tender insights into this fascinating woman, Denise’s mother.

Denise also is a screenplay writer. 400 Seasons is a supernatural drama about a successful young African-American woman whose career is sidetracked when she inadvertently awakens good and evil ghosts from African sculptures.

Ten Snap Shots is a drama based on the true story of a woman haunted by ten pivotal points in her life: parental abuse, cocaine addiction, child custody battles. And yet she finds strength to be a loving wife, parent, and friend.

Already Cooked is a comedy/drama about four women, three African-American and one African, who drive through Ghana, talking, laughing, fantasizing, and arguing about love and the men in their lives. They are challenged and matured by what they encounter on the road. Already Cooked earned three finalist awards: at the Independent Black Film Festival (Atlanta, GA), the CinemaSpoke Screenplay Competition (St. Louis, MO), and the Black Hollywood Film Festival (Los Angeles, CA).