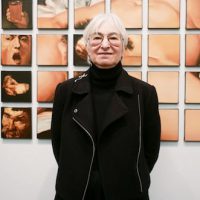 Dotty Attie (b. 1938, New Jersey) is a painter, photographer and printmaker who is perhaps most well known for her feminist reworkings of Old Master paintings. Based on the work of artists such as Eakins and Caravaggio, and often incorporating multiple panels and text, Attie’s revised paintings critique representations of the body and confront the gender-bias in art. She was a founding member of the pioneering female-run A.I.R. Gallery, New York, in 1972.

Attie studied at the Philadelphia College of Art; the Brooklyn Museum Art School in New York; and the Art Students League, New York. She has been exhibiting in museums and galleries worldwide for more than four decades, including at the University of Chicago, Illinois; Aldrich Museum of Contemporary Art, Ridgefield, Connecticut; University of Rhode Island, Kingston; Corcoran Biennial, Washington, D.C., and O.K. Harris Gallery, New York City. Attie’s work is in the collections of the Museum of Modern Art, NY; Whitney Museum, NY; Brooklyn Museum, NY; Wadsworth Athenaeum; National Museum of Women in the Arts; University of Massachusetts, Amherst; Smith College, Northampton, Massachusetts; and Arkansas Arts Center, Little Rock among others. She has received grants from the New York State Council on the Arts and the National Endowment for the Arts. She lives and works in New York City and is represented by PPOW Gallery.