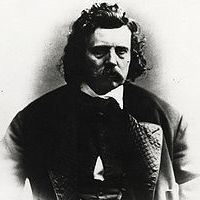 Emanuel Leutze was a German-American painter who was born near Württemberg, emigrated with his family in 1825 and settled in Philadelphia where, from 1834 , he was taught by John Rubens Smith. Two years later he received his first portrait commissions and continued portraiture until 1841 when, with financial assistance, he travelled to Europe, enrolling at the Royal Art Academy, Düsseldorf, as a history painter. Despite successes Leutze resented the rigid academicism of the Academy and left in 1843 to travel in Germany and Italy. In 1845 he returned to Düsseldorf where he embraced liberal political beliefs which inspired many of his historical subjects. He entertained visiting American painters and remained involved in American affairs, beginning, in 1849, his most famous work, Washington Crossing the Delaware (1851; New York, Met. Mus.). He exhibited this vast and dramatic picture in New York and Washington in 1851 to great popular acclaim. From 1852 he worked in Düsseldorf, returning to America in 1859. His successful career encompassed history paintings, including the mural Westward Ho (1862) for the Capitol in Washington, and portraits of Unionist leaders of the Civil War including Lincoln and General Grant.