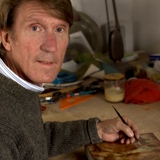 Originally from Arizona, Gary Washmon studied painting at the University of New Mexico, BFA 1976, and the University of Illinois (MFA 1980). He moved to Texas in 1978 to teach at the University Of Texas in Austin, and is currently Professor of Art at Texas Woman’s University. His artist residencies include Yale Summer School for Music and Art, Virginia Center for the Creative Arts, the Vermont Studio Center, as well as workshops in Mexico and Canada.

Washmon’s work was published in “American Art Now” and “Art of the 80’s”, by Edward Lucie-Smith and is listed in numerous editions of “Who’s Who in Art in America” and “Who’s Who in the South and Southwest, and his work is included in many public and private collections. Past exhibitions include numerous solo exhibitions in private and university galleries. Washmon’s work has also been included in many invitational and competitive exhibitions throughout the United States and abroad.

Gary Washmon states, “My work is a response to my experiences, my environment and my knowledge of the world. Using the land as my primary focus, I hope to transcend visual painted imagery by the use of acute observations. Formally, I am particularly interested in qualities of light, unexpected viewpoints and compositions, dynamic contrasts and rich color.”