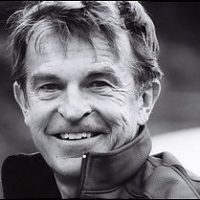 George A. Peterson was born in 1943. He earned a Bachelor of Arts degree in politics from Princeton University in 1965, and a Masters degree from Columbia University Graduate School of Journalism in 1970. He later studied anatomy at Georgetown University from 1975 to 1978, and figure painting/drawing with
Hayes Friedman at the Corcoran School of Art, Washington, D.C., from 1992 to 1996.

The unifying element of Peterson’s painting is objective form, expressively rendered. He believes that paint is capable of creating form and simultaneously expressing its own essence. He paints in oil. The paintings evolve over many sessions. The surfaces are progressively built up. Colors and forms are altered
and moved with each new layer. The sources for his recent imagery are varied – ranging from reflections on his childhood on a dairy farm to investigations of masterworks of art history. His fundamental belief is that painting is about the beauty with which lines and planes and colors are brought into harmony. He sees painting as continuous problem solving and decision making.