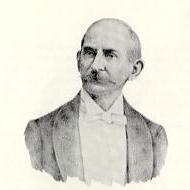 George McConnell studied portraiture in Philadelphia and New York. He also studied landscape painting with George Inness and continued his art training at the Academy Julien in Paris.
In 1883, at the age of thirty-one, McConnell settled in Portland, Maine. He did commercial work that he sold at various hotels and resorts. He painted a great variety of subjects, including coast and seascapes around Portland as well as White Mountain Landscapes. His White Mountain paintings date from 1892 to 1921. His portraits hang in six state capitols, including Maine’s.
McConnell was a frequent exhibitor at the Portland Society of Art.
Although a prolific artist, he earned the larger part of his income as a virtuoso banjo player and minstrel man.