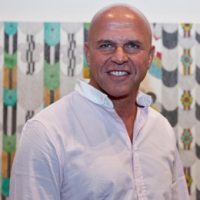 Glenn Goldberg was born in the Bronx, studied at the New York Studio School and received a MFA from Queens College. He was named the 1996 Heilman Artist and has received grants from the National Endowment for the Arts and the Guggenheim Foundation.

Goldberg creates luminous works made of delicate brushstrokes and flecks of color. His intricate designs seem to float off the surfaces and recall outsider art, Tantric drawings and stained glass. A recent series of paintings, each titled “Wish,” feature flowers with kaleidoscopic geometries of petals on subtly grayed backgrounds sprinkled with black dots. Goldberg’s paintings refer to anti-authoritarian attitudes of the 1970s that brought political and aesthetic movements such as feminist art and pattern painting to the forefront. He states that his paintings “attempt to facilitate the inexplicable.”

Represented by Knoedler Gallery in New York, Goldberg’s work receives international recognition. He has had solo shows at Willard Gallery in New York, Greenberg Gallery in St. Louis, Barbara Krakow Gallery in Boston and Galerie Albrecht in Munich. His work has been included in group exhibitions at Castelli, Harvard University and Jeffrey Hoffeld Gallery. Goldberg’s work is held in numerous collections, including the Metropolitan Museum of Art, the National Academy of Arts and Letters, the Brooklyn Museum of Art, the National Gallery of Art and the Museum of Contemporary Art in Los Angeles.