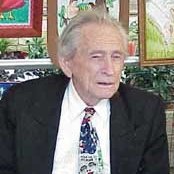 For forty years, Howard Finster was a minister. After retirement, he lived in Summerville, Georgia, and constructed a garden dedicated to his religious beliefs. Called “Paradise Gardens Park and Museum,” it has become a fantastic world created from found objects– fragments of mirrors, salvaged refrigerator doors, concrete walls, hubcaps, mosaic cement paths, and a pump house of Coca-Cola bottles—all to the glory of the Lord.

Finster appeared regularly on Sundays to great visitors and to guide them through the maze of symbolic sculptures, structures including a John Deer tractor and the Tomb of the Unknown Body. Indeed he has become a much-loved man for the vigor of his beliefs and his compassion towards others.

Except for a book of drawings he did in the 1930s, he did not do paintings until 1976 when he had a vision to do sacred art. He began to mount them on glass salvaged from television screens. His mediums became oil, house paint, watercolor and car lacquer–all wild Baroque creations. In 1999, he completed a 4 X 8 foot painting of The Last Supper.

He has painted album covers for the rock groups R.E.M. and Talking Heads, the latter voted album cover of the year in 1985 by Rolling Stone Magazine. In 1996, Finster was commissioned by the Coca Cola Company to paint an eight foot Olympic Coke Bottle to represent the United States Art exhibits at the Olympics.

In December 1995, the High Museum of Atlanta, Georgia held a Birthday Party exhibit for Finster that proved to be one of the most highly attended events at the museum.

He and his wife Pauline raised five children.