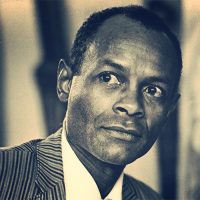 Hughie Lee-Smith was born in Eustis, Florida, but went to school in Cleveland, Ohio, and graduated from the Cleveland School of Arts with high honors and a grant for post-graduate studies. He served in the Navy during World War II and there completed a series of paintings entitled “The History of the Negro in the United States Navy”. He had his first one-man show in Chicago in 1945, and has exhibited his works in one-man, group, and jury shows ever since. Mr. Lee-Smith began to win prizes for his art in 1938 and has received such awards as the Detroit Institute Founders Prize in 1953, the National Academy of Design (four times), the Emily Lowe Award (1957), and the 1960 award from the American Society of African Culture. In 1967, he was elected a member of the National Academy of Design. He has been an instructor in art, the head of the Department of Drawing and Painting at Claflin University, and he has taught at Rex Goreleigh’s Studio-on-the-Canal in Princeton, New Jersey.

After leaving the Navy, he returned to the classroom as a student himself and won a Bachelor of Arts from Wayne State University in 1953. Hughie Lee-Smith is a realistic and yet magical painter who is intimately concerned with the loneliness of decaying urban life. A fine draughtsman and quiet colorist, he paints with the precision of the surrealists in a highly poetic, minor key. His settings of aged dying neighborhoods are wastelands where old buildings stand isolated, side by side with empty spaces once teeming with life. He peoples these wastelands with one, two, or three individuals: when they are alone they are seemingly unaware of their surroundings or so depressed by them that they stand doubly alone: when his individuals have companions, each is quite unaware of other presences, and moves alone in his private world. Lee-Smith is marvelously skilled at depicting textures. The care with which he minutely details non-organic objects-crumbling plaster, cement, wire, and wood contributes a kind of sharpness to the overall feeling of desolation. The brooding intensity and penetrating honesty of his work hold a degree of universality and truth within contemporary Western civilization.