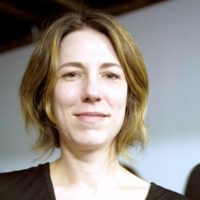 Jacqueline Humphries was born in New Orleans in 1960, and lives and works in New York. Humphries attended Parsons School of Design, New York, in 1985, and the Whitney Independent study programme in 1986. Humphries’ paintings are held in the collections of the Whitney Museum of American Art, New York, The Museum of Modern Art, New York, and the Smithsonian Institution, Washington DC. Recent institutional exhibitions include Besides, With, Against, and Yet: Abstraction and the Ready-Made Gesture, The Kitchen, New York (2009), Prospect 1 New Orleans, New Orleans (2008), Affinities: Painting in Abstraction, CCS Bard Hessel Museum (2007), and her work is currently on view at the Museum of Modern Art, New York. Humphries has exhibited regularly in New York since 1989, and made her most recent solo show with Greene Naftali Gallery in 2009.