Born in New York City, eight years after Robert Fulton sent the first steamboat up the Hudson River, James Bard saw and reflected in his marine paintings the industrial development of shipping in America.

He and his twin brother John Bard together painted more than 350 marine portraits, steamships and sailboats in the New York Harbor and on the Hudson River. Likely James did the outline sketches, and John filled in the color and backgrounds.

However, James quit working with John after 1849, and John died seven years later, but James kept painting, doing nearly 4000 works during his lifetime and leaving a record of nearly every steamship on the Hudson River during the second half of the 19th century. He worked until the year of his death and died in White Plains, New York.

Although the paintings are rather primitive in their flat colors and perspective, the work is important to marine historians because of the accuracy and detail of the depictions. Usually the ships are placed against a generic background, and if figures are present, they are stiff and primarily serve the purpose of showing the size of the ship. James usually put his name and studio address on his work, so he had ongoing promotion for his paintings. 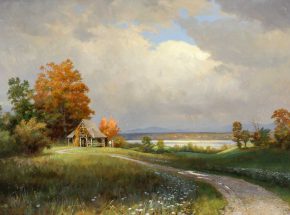