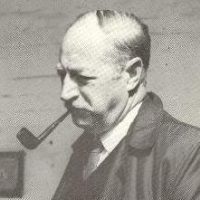 ohn Ferren was born in Pendleton, Oregon, on October 17, 1905. At the age of twenty, he apprenticed with an Italian stonecutter in San Francisco. Ferren’s early experiences with stonecutting influenced his style, particularly evident in the sculptural quality of his paintings, achieved through flat backgrounds and curving planes. Though Ferren was known later in his career as an intellectual among his peers, he avoided academe and formal art institutions, preferring to develop his own artistic style and theories that were nourished by his adventurous lifestyle and curious mind. Going to Europe in 1929, he attended the Sorbonne in Paris and also studied briefly at the Universita degli Studi in Florence and the Universidad de Salamanca. His travels in Europe exposed him to the modern art movements of the early 20th century, such as cubism, surrealism, and expressionism. In 1930 Ferren returned to San Francisco for his debut solo exhibition at the Art Center; however, the lack of energy and artistic stimulation on the west coast at that time led Ferren to return to Paris in 1931

In Paris Ferren was introduced to William Stanley Hayter’s Parisian Atelier 17, where some of the greatest artists of the 20th century, such as Joan Miró, Max Ernst, and Marcel Duchamp participated in experimental workshops. Like them, Ferren explored Hayter’s revolutionary theories on “the nature of space in a linear world,” inquiries that transformed Ferren’s style. He rediscovered sculpture and developed a new technique for creating relief sculptures, through pouring plaster into lines etched in a metal etching plate. The graceful lines he had etched were revealed on the plaster surface, creating a rhythmic composition. These reliefs were among Ferren’s most successful works.

Ferren returned to the United States in 1938, settling in New York. He established himself in New York’s art community by becoming a member (and later president) of The Club, an informal group of artists who represented the social and intellectual center of abstract expressionism in New York. Always exploring new forms of art, in the late 1950s Ferren collaborated with film director Alfred Hitchcock, for whom he served as artistic consultant for the films The Trouble with Harry (1955) and Vertigo (1958). Ferren remained active in the art world until his death in 1970. 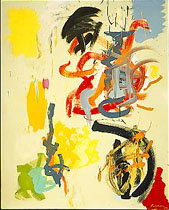