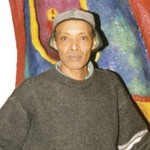 Mickaël Bethe-Selassié was born in Ethiopia in 1951. After graduating from high school in 1970, Mickaël Bethe-Selassié left Ethiopia for France where he studied science at university. Not until later, at the age of 30, did Mickaël begin painting and sculpting in papier mâché. The artist lives and works in Paris.