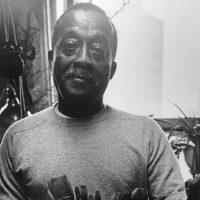 Norman Lewis was born in New York City and studied with Augusta Savage at the Savage School of Arts and Crafts (1933) and at Columbia University (c.1933-1935). During the Great Depression, Lewis taught art through the Federal Arts Project at the Harlem Community Arts Center (1936-1939), and later with Elizabeth Catlett and Charles White at the George Washington Carver School.

Lewis frequented 306, an artist’s workshop headed by artist Charles Alston that served as a center for the most creative minds in Harlem. Although Lewis joined the Artists Union and was an ardent political activist, he believed that “political and social aspects should not be the primary concern; esthetic ideas should have preference.”

Lewis’s work of the late 1930s and early 1940s was predominantly figurative social realism, depicting the lives of the urban black families and workers. In the mid-1940s, Lewis abandoned realism and began to explore abstraction, becoming an important artist of the New York School and Abstract Expressionist movement. By the late 1940s, Lewis was represented by Willard Gallery in New York City and had developed his own personal calligraphic style consisting of fluid forms suggesting groups of figures in activity.

In 1955, Lewis received the Carnegie International Award in Painting, making him the first African-American artist to receive this prestigious prize. In 1963, Lewis was a founding member of the Spiral Group, and in 1969, along with Romare Bearden and Ernest Crichlow, founded Cinque Gallery, a downtown gallery dedicated to emerging minority artists.

A recipient of a National Endowment for the Arts Grant (1972) and a Guggenheim Memorial Fellowship (1975), Lewis received his first retrospective exhibition in 1976 at the Graduate Center of City College, New York. More recently, Lewis has been the subject of two solo exhibitions: The Studio Museum in Harlem?s exhibition, “Norman Lewis: Black Paintings 1946-1977” (April 1 – September 20, 1998) and the Michael Rosenfeld Gallery exhibition, “Norman Lewis: Intuitive Markings – Works on Paper, 1945-1975” (May 6 – August 13, 1999).