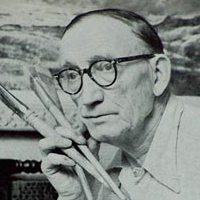 Born in Larvik, Norway, Paul Lauritz became a noted painter based in California of portraits and desert landscapes. Early in his career, he was in Alaska.

He was raised in the picturesque Norwegian village of Larvik and exposed to famous painters from all over the world who came there for subject matter. One of them, an English watercolorist, gave him painting lessons in exchange for his family providing board and room, and local painters Fritz Thoulaw and Christian Krogh also encouraged him as a young man.

At age 16, he headed West and got a job in Vancouver, Canada, and then Portland, Oregon as a commercial artist doing maps, posters and decorations. In Portland, he married Mary Potterton in 1912, and then began a career as a serious portrait artist.

However, the lure of gold in Alaska took him and Mary to Sunrise Creek, where they lost money, and he vowed he would never again be distracted from his art work. He became close to Alaska’s most distinguished artist, Sydney Lawrence, who was impressed by Lauritz’ determination and encouraged his art career in every way.

Just after World War I, he and his wife moved to Los Angeles when the city was beginning to boom, and he had a studio from which he did portrait painting on Spring Street in the old Lyceum Theater. In 1920, they moved to the hills overlooking the city and built the first dwelling on Clayton Avenue. He developed a fascination for desert landscapes, and he and his wife did much exploring and extended camping in the deserts of the Mohave, Colorado, and Arizona.

At first, he did plein air painting but discovered that he got a stronger light on the canvas by completing the work in his studio. He used gigantic brushes, pre-war French bristles, and even used them to achieve minute strokes. He also used palette knives and his hand to achieve a textural effect and generally simple, basic colors.

He was active in the California art scene as a member of the Los Angeles Municipal Art Commission and President of the California Art Club, plein air landscape painters for whom he gave numerous painting demonstrations and workshops. His work was sold by the Artists Guild of America and the Vose Galleries of Boston. During World War II, the King of Norway purchased one of his marine paintings that was transported by submarine.