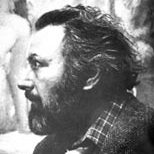 Paul Resika (b.1928–) is an abstract figurative and landscape painter whose paintings are meditations on nature. Notable for their geometric forms placed against a mixed palette of high-keyed and subdued color, Resika’s paintings create striking oppositions between form, color, and light. Like the paintings of Bonnard, Resika’s work encapsulates the hidden power of nature with its color and forms. Resika himself states that he strives to capture “a feeling for nature but without nature.” His work blends the figurative with the abstract in such a way that one senses Resika’s response to both his physical and interior worlds.

Born in New York City, Resika studied with Hans Hofmann in the 1940s and received his first show at age nineteen, at New York’s George Dix Gallery in 1948. He was part of what is now considered the second generation of the New York School—artists who applied abstract expressionist techniques, such as the emphasis on gesture and emotional immediacy to the depiction of representational subject matter. During the 1950s, Resika traveled in Europe and began developing the series of recurring pared-down, quasi-abstract motifs: piers and harbors, farmhouses, floral still lifes, female figures. The tradition of French modernist painting, specifically the work of Pierre Bonnard and the French Fauvist painters Matisse and Derain, is strongly evinced in his work.

Currently Resika spends winters in New York City, summers in Provincetown, Massachusetts, and one month each spring in southern France. Each locale and its accompanying season informs his work and plays an important role in his choice of subject matter and palette. Resika was elected to the National Academy Design in 1976 and to the American Academy of Arts and Letters in 1994. He has exhibited both in the United States and abroad. His works are included in the collections of the Metropolitan Museum of Art, New York, and the National Museum of American Art in Washington, D.C.