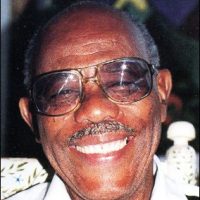 Mr. Duffaut is a well-known Haitian artist who was born in Jacmel in 1923. He was a taciturn introvert youth, who lived through an unhappy childhood ruled by an incompetent mother, with drawing as his only expressive outlet.

He recounted that the Virgin Mary appeared to him in a dream at La Gonave Island, leading him to produce an ornamental sculpture for the chapel dedicated to her. He had been working with his father as a boat builder, but quit his job to pursue his new talent. Rigaud Benoit helped guide him in his new found occupation. In 1950-51 he painted “The Temptation of Our Lord” and “Native Street Scene Procession” murals in the Holy Trinity Cathedral in Port-au-Prince.

A naive painter, he started out doing highly precise paintings of his hometown, then shifted toward a style at times sophisticated and at times fantastic. He is world renowned for his mountainous landscapes with serpentine roads and his crowded street scenes. His imaginary villages where all lines point towards the heavens and his use of color, especially red, blues, and yellows are quite distinctive and very popular. These fantastic scenes carry meanings which are related to his personal mystical beliefs and voodoo mythology. Duffaut’s style is widely popular and unfortunately widely copied by many with varying degrees of success. His work is exhibited in the States, Europe and Japan.