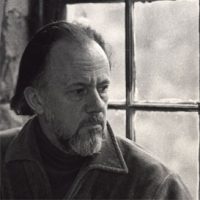 Richard Pousette-Dart was born in St. Paul, Minnesota, to a poet mother and a painter father who throughout his formative years strongly encouraged their second son to pursue his art. While he was still a young child, his parents relocated to Valhalla, New York. Pousette-Dart briefly attended nearby Bard College before moving to New York City to devote himself full time to painting and sculpture.

Along with artists Robert Motherwell, Mark Rothko, and Willem de Kooning, Pousette-Dart became a founder of the New York School, which thrived during the immediate postwar decade. Like its other members, Pousette-Dart turned away from realism, creating abstract, spontaneous-seeming compositions that incorporated Freudian and Jungian symbolism and elements of European modernism. In the 1950s the artist produced a series of white paintings with penciled lines in which the bird motif of his small brass sculptures from the 1930s reappeared. Abandoning the all-white approach in the late fifties, Pousette-Dart began to build up thick, stucco-like surfaces of expressive color. His work grew in scale in the 1960s and 1970s, and by the late seventies his simplified, pointillist compositions were suggesting exploding stars, planets, and the depths of infinite space.

Throughout his career, Pousette-Dart also taught painting at a number of New York institutions, including the New School for Social Research, the School of Visual Arts, Columbia University, Sarah Lawrence College, and the Art Students League. In 1981 he received the first annual “Distinguished Lifetime in Art” award from the Louis Comfort Tiffany Foundation. The following year Pousette-Dart was chosen by the International Committee of the Venice Biennale to exhibit in the main pavilion.