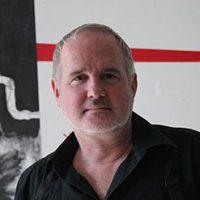 Tim Rollins and K.O.S.: A History
JANUARY 23 – MAY 31, 2010
In August 1981, Tim Rollins, then twenty-six years old, was recruited by George Gallego, principal of Intermediate School 52 in the South Bronx, to develop a curriculum that incorporated art-making with reading and writing lessons for students classified as academically or emotionally “at risk.” Rollins told his students on that first day, “Today we are going to make art, but we are also going to make history.” Asked what he meant by “making history,” Rollins said:

“To dare to make history when you are young, when you are a minority, when you are working, or nonworking class, when you are voiceless in society, takes courage. Where we came from, just surviving is ‘making history.’ So many others, in the same situations, have not survived, physically, psychologically, spiritually, or socially. We were making our own history. We weren’t going to accept history as something given to us.”

Together, Rollins and his students developed a collaborative strategy that combined lessons in reading and writing with the production of works of art. In a process they call “jammin’,” Rollins or one of the students read aloud from the selected text while the other members drew, relating the stories to their own experiences. Their signature style was born as Rollins and K.O.S.—Kids of Survival—began producing works of art directly on the pages of these books, cut out and laid in a grid on canvas.

The collaboration between Rollins and his students soon outgrew the classroom. Frustrated with the strictures of the public school system, Rollins opened the Art and Knowledge Workshop, an after-school program in a community center five blocks from I.S. 52. After teaching, Rollins would meet K.O.S. members at the workshop; homework would be done and art would be made. In 1987, Rollins and K.O.S. implemented a traveling workshop to spread the ideas and inspiration behind their project beyond the South Bronx. In 1994, they moved their operation to a studio in New York’s Chelsea neighborhood. There Rollins and some long-term K.O.S. members rebuilt and expanded the project nationally and internationally, significantly increasing the number of workshops conducted with other schools and arts institutions. Today there are active K.O.S. members in Philadelphia, Memphis, San Francisco, and New York.

In 1986, Rollins and K.O.S. had their first exhibition at Jay Gorney Modern Art, which represented them until they moved to Mary Boone Gallery in 1991. Rollins and K.O.S.’s decision to exhibit their art in galleries and museums signaled an important turning point: they began to distinguish themselves from other teacher-student collaborations by demanding that their work be engaged first as fine art. Between the mid-1980s and early 1990s, Rollins and K.O.S. participated in two of the Whitney Museum of American Art’s Biennials (1985, 1991); Documenta in Kassel, Germany (1987); the Venice Biennale (1988); and the Carnegie International, Pittsburgh (1988), and had solo shows at the Walker Art Center, Minneapolis (1988); the Institute of Contemporary Art, Boston (1988); the Dia Art Foundation, New York (1989); the Wadsworth Athenaeum, Hartford (1990); the Museum für Gegenwärtskunst Basel, Switzerland (1990); the Museum of Contemporary Art, Los Angeles (1990); and the Hirshhorn Museum and Sculpture Garden, Washington, D.C. (1992).
[Souce: http://fryemuseum.org/exhibition/3315/]
Photo courtesy Cheryl Kaplan