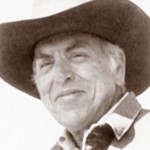 “When Tom Ryan paints a cowboy, you know it is the real thing,” says one fellow artist. “You can tell just by looking at the figure that that man has been around. His horses are real cow horses. His men are real ranch hands. They always have just the right feel; there is never anything in the painting that does not fit the scene exactly. He may not have grown up in the West around ranches and cattle, but he captures them better than anyone else.

Ryan, who is perhaps best known for his paintings of the famous 6666 Ranch in Guthrie, Texas, has been studying and interpreting the life of the modern cowboy for more than forty years. Because he has chronicled a single ranch for a long period of time, Ryan has a unique perspective that has enabled him to capture the changes, nuances, and joys of the cowboy’s (and cowgirl’s) life. His paintings of the 6666 Ranch are particular and specific to that location, but they document the continuity and the changing traditions of all of Western ranch life. Ryan’s depictions of real working cowboys stand as testaments to a way of life that has weathered hard times, that celebrates a job well done and an independent life well lived.

Before joining the Cowboy Artists of America in 1967, Ryan had a very successful career as an illustrator of book jackets. He also produced paintings for the calendar publisher Brown and Bigelow. Today, he is considered one of the deans of contemporary Western art. In 2001, Ryan was honored with a major retrospective exhibition at the National Cowboy and Western Heritage Museum in Oklahoma City, Oklahoma. His 350-foot-wide bas relief, The Remuda, graces the western façade of the museum. His works are in the permanent collections of the National Cowboy and Western Heritage Museum in Oklahoma; the Phoenix Art Museum in Arizona; the American Quarter Horse Heritage Center & Museum in Texas; the National Ranching Heritage Center in Texas; and the Nita Stewart Haley Memorial Library, also in Texas.