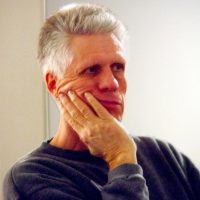 Vernon Fisher was born in 1943 in Fort Worth, Texas. He earned a Bachelor of Arts degree in 1967, from Hardin-Simmons University, Abilene, Texas; and a Master of Fine Arts degree in 1969, from the University of Illinois, Champaign-Urbana. After graduation, he returned to Texas, where from 1969 to 1978, he served as an associate professor of art at Austin College in Sherman. In 1978, he joined the faculty of the University of North Texas, Denton, as a Regents Professor of Art. Among his honors include three Individual Artist’s Fellowships from the National Endowment for the Arts (1974, 1980, 1981); a Louis Comfort Tiffany Foundation Grant (1984); the Distinguished Teaching of Art Award, College Art Association (1992); and a John Simon Guggenheim Fellowship (1995). In 1981, Fisher was included in the Whitney Biennial, Whitney Museum of American Art, New York, and in exhibitions at the Guggenheim Museum, New York, and the Hirshhorn Museum and Sculpture Garden, Washington, DC. In 1990, he became the first Texas artist to be honored with a solo exhibition at the Museum of Modern Art, New York. Since then, his work has been included in countless solo and group exhibitions throughout the United States and abroad. In 2000, he was again featured in the Whitney Biennial. He currently lives and works in Fort Worth, Texas.