Willie Lee Atkyns, Jr. was born September 13, 1913, in Washington, D.C. He established a successful art career early, making his debut in New York in 1941 at #10 Gallery, and was a member of the Landscape Club of the Washington Arts Club.

He worked for the U.S. Bureau of Engraving and Printing and, during World War II, served as a map specialist for the Army. In 1945 he resigned his government positions to teach art at the school he established in Washington, D.C, the Lee Atkyns Studio School. During the summers, he taught at extensions of his school in Puzzletown, Johnstown, Altoona, and Indiana, Pennsylvania.

He retired from teaching in 1968 to devote all his energies to painting, moving to his Puzzletown studio/home (a restored chapel).

Atkyns was active in many art organizations, earned numerous awards, and exhibited his work in museums, galleries and public buildings. He died on September 13, 1987, in Duncansville.

Largely self taught, Atkyns expressed admiration for the painting of Wassily Kandinsky and Andrew Wyeth. Painting in a variety of styles, he produced realistic, abstract, and non-objective works.

The Dynamic, or Liberated Lines Series, is considered his most successful work. Begun in the 1960’s, these abstract illusionist works attempted to communicate in graphic terms the artist’s emotional response to music and the sounds of nature. Atkyns believed in synthesizing aural and visual elements to achieve spiritual fulfillment. 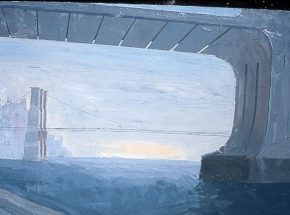