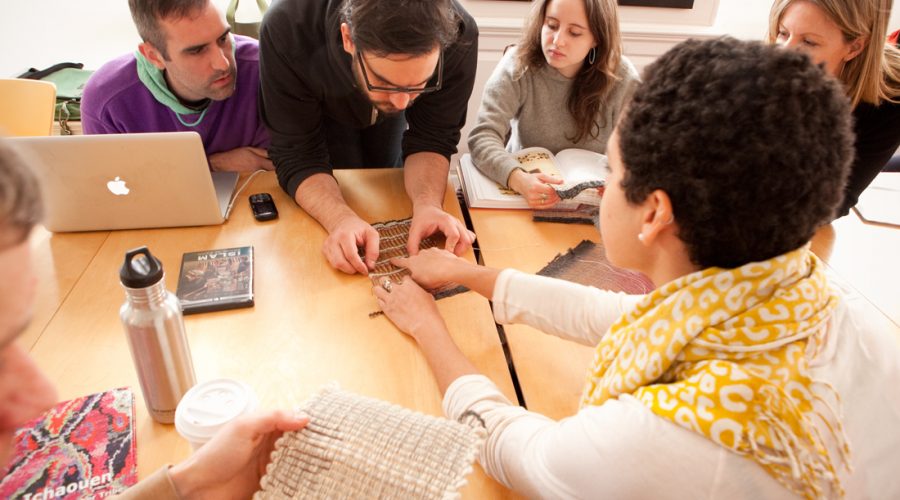 Boston Globe – Students at the Rhode Island School of Design are getting a crash course in international diplomacy as they work with a professional sculptor on artwork for a new U.S. embassy in Morocco. The collaboration with the U.S. State Department’s ART in Embassies program is a first for the premiere arts school in Providence. It’s given nine hand-picked students the chance to put their talents to use for Uncle Sam.

“One the one hand it’s a little scary, because it does put pressure on you,” said Bayne Peterson, a 27-year-old graduate student from Boston. “But I’m looking at it as a real opportunity to do something special.”
Miami artist Jim Drain is leading the class. He plans to incorporate the students’ ideas in a large sculpture for a new embassy building in Rabat, Morocco. Construction is slated to end by 2015. The new embassy will replace an outdated facility in the North African nation.

Drain, himself a RISD graduate, is an accomplished artist but acknowledged that serving as an unofficial ambassador of American art was “a little daunting” at first.
“We all came to this not really knowing much about Morocco or what the State Department wanted,” he said. “I’m an artist, not a diplomat. At the end of the day you do the best work you can do.”

Over the course of several weeks the RISD students researched Moroccan art and society, studied the plans for the new embassy and brainstormed ways to mix and match aspects of American and Moroccan art. The resulting works used glass, wood, wax, textiles and other materials.
Peterson created a piece that used antique saw handles on a board to create the face of a lion — a common motif in Moroccan art.
ART in Embassies is responsible for selecting artwork for U.S. embassies and consulates around the globe. The program, which was started by President John F. Kennedy, will celebrate its 50th anniversary next year.

“We have venues in over 180 countries,” said Virginia Shore, chief curator for ART in Embassies. Shore said art, with its universal language, can play a significant role in relations with another culture. “It was originally all about highlighting American art but it’s become more of two-way cultural exchange.”
Officials from the State Department visited the classroom Thursday to check on the students’ progress. Shore said it’s just the beginning of what is hopefully a long relationship between the State Department and RISD.
The following is an excerpt from an article first published on boston.com For the full version visit: http://www.boston.com/news/local/rhode_island/articles/2012/02/10/ri_school_of_design_creates_us_morocco_embassy_art/?camp=pm